SONG OF THE DAY The Cactus Channel – Budokan 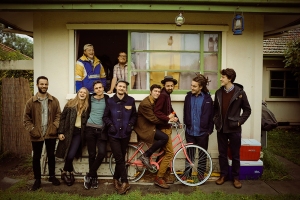 For this 10-piece Melbourn funk-soul outfit, music was to be their ultimate goal right from the onset.  Leaving high school and going straight into music, The Cactus Channel were not only making music by the time they were 17, but were also self-producing and self-managing.  Impressive alone is the fact that this band were successfully carving out their own path so early on, but this young band were also creating original funk breaks and beats with a musical maturity far beyond their years.

Assisted by their record label Hope St Records, this wonderfully arranged orchestra have been recording their big sounds since 2012, more recently collaborating with fellow Melbourian Chet Faker on a two-track recording that was released this September,  (featured on my blog here).

Today’s song is taken from their 2012 album ‘Haptics’ and is titled ‘Budokan’..I just love the drum intro and the way the layers gently gather, it sure is a funky little number!