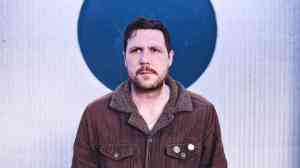 I am sitting here right now asking myself just how it is that Damien Jurado has been kicking about for the last twenty years and I’ve only just discovered him! Yes, it’s true, until yesterday I had never heard of this fantastic artist even though he has been releasing music since 1995!  I guess it’s definitely a case of better late than never, I got here in the end and that is all that counts.

So far I have tracked down his eleventh studio album ”Brothers and Sisters of the Eternal Son” because this is where today’s song ”Silver Timothy” can be found, and this is the song that grabbed my attention instantly.  For the first few seconds the guitar intro tricked me into thinking that I’d stumbled upon some acoustic version of Shocking Blue’s ‘Venus’ until Jurado’s haunting falsetto opens with the line “I was met on the road by a face I once knew/ Shapeless was his frame and his colors were few.”  Then, as the song unfurls in a mysterious haze of soaring vocals, free-flowing latin percussion and spacey synths, it’s hard not to be totally absorbed into this cosmic jaunt.