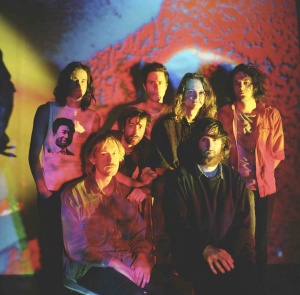 Fuelled by a myriad of cosmic sounds and space rock, Australian seven-piece King Gizzard and the Lizard Wizard entered our cosmos in 2010 with a psychedelic bang.

Eight albums later and the band are now entering into new experimental dimensions, expanding their surf-garage, psychedelic rock sound with the additional influences of folk, jazz, soul and Krautrock; a concept that came to life in their 2015 album ‘Paper Mache Dream Balloon.’  Frontman Stu MacKenzie explaining the transition had this to say:

“After Mind Fuzz and Quarters I was starting to get over concept records. I wanted to make an album with a collection of short unrelated songs. I wanted to steer away from electric guitar music, which I feel like we’d explored pretty heavily on the last couple. So Paper Mache Dream Balloon, the concept-less concept album, got a concept.

No electric instruments, just acoustic guitars, flute, double bass, fiddle, harmonica, drum kit, clarinet. Whatever we could find really. We recorded it mostly in an empty shipping container on my parent’s farm in country Victoria. It was all horses, emus, and tim tams”.

Taken from this album comes today’s song ‘The Bitter Boogie,’ but there’s nothing bitter about this explosion of psychedelic blues!  This is sweet, sweet psych rock with a hint of Canned Heat’s ‘On The Road Again.’  Listen above.