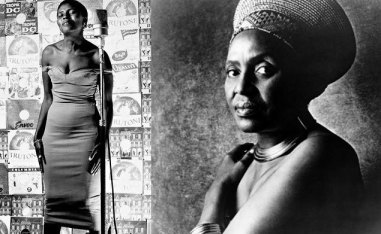 Following up on the inspirations behind yesterday’s song, ‘Makeba,’ I thought I’d check out the woman who influenced its creation.  Zenzile Miriam Makeba, aka Mama Africa, was an iconic South African singer/songwriter and civil rights activist.

Emerging in the early 60’s Makeba was the first artist from Africa to popularise African music, spreading it globally.  One of her most well-known songs is ‘Pata Pata,’ a song I’ve known for years but never knew who was behind it; this was first recorded in 1957 and was released ten years later in the U.S.  Miriam has an impressive history, one which you may or may not be familiar with (I am the latter so I’ve some catching up to do!).  She has toured with so may popular artists such as Paul Simon, Harry Belafonte and her former husband Hugh Masekela, and spent an early part of her career in an all-girl group called the Skylarks, recording in this band between 1956 and 1959.

Makeba and the Skylarks became one of the most successful South African vocal groups that blended American influences such as Mills Brothers-style pop, gospel and jazz, with South African tribal rhythms and vocal styles.  Their songs were often sang in Xhosa or Zulu, also in English too but it was the beauty of their harmonies that connected and communicated their sound, language was no barrier.  Their music is full of energy and even all these years later, it remains as infectious and uplifting as ever (as I am discovering)!

‘Intandane’ is glorious strolling song that fuses sweet-sounding vocal harmonies with a laid-back jazz-influenced melody and was recorded by the Skylarks sometime in the late 50’s.  Listen above.

I discovered an interesting 10 minute documentary on Miriam Makeba earlier which is definitely worth a watch, Check that out here.