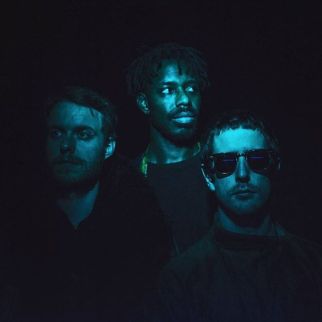 London-based band, The Comet Is Coming provide large helpings of light, joy and celebration through their sounds, all of which are delivered in a fiery blaze of musical mantras, polyrhythmic beats and mind bending colours.

Incorporating elements of jazz, electronica, afrobeat, funk and psych-rock, The Comet Is Coming are made up of Shabaka Hutchings on Saxophone (aka “King Shabaka”), Dan Leavers on synths and keys (aka “Danalogue The Conquerer”) and Maxwell Hallett on drums (aka “Betamax Killer”)..and their mission:  To paint the universe with their cosmic vibrancy and sound-shifting light!

Signed to The Leaf Label the band’s debut album, Channel The Spirits which was released last April and was nominated for the Mercury Prize at the end of last year.  Their most recent track, Final Eclipse was released at the end of 2016 and is nothing short of an otherworldly experience, blasting you off into another time and dimension with frenzied sax, furious beats and an alien-sounding space-dwelling synth, it’s a wild and cosmic experience…but you wouldn’t expect anything less from The Comet Is Coming.

The band is currently touring and I’m definitely going to make it to one of their gigs! For tour dates, click here.  Meanwhile check out this fantastic, wild and electrifying live performance of Final Eclipse above and if you haven’t already snapped it up, grab yourself a copy of this track from here.