One thing that always strikes me about today’s artist is his very distinct signature sound which, although often delicate and understated by nature, possesses the power stand out and be recognised.

Chelou (whose name is a French expression used to describe something that is unknown) is a singer-songwriter based in North London who first came to my attention back in March 2015 with early single, Aneurysm.

Since then I’ve made a point of keeping a close eye on this emerging artist, featuring other tracks, You’re So Good, Don’t Hate on Me and his most recent single Halfway to Nowhere, which has topped over 4.8 million YouTube views! 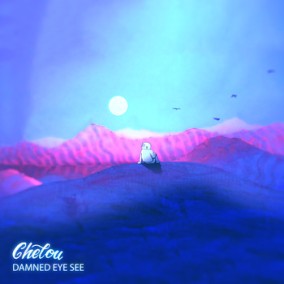 Having previously collaborated with Maya Jane Coles on his last single, Chelou’s latest offering finds the pair working together again on a song called Damned Eye See.  Releasing yesterday, this track was recorded in his bedroom, utilising a host of unusual ‘instruments,’ including cups and kitchen utensils (for percussion), with vocal samples provided from recordings of his 8-year-old sister Flic who sent them over from her home in the South of France!

Speaking of the song, Chelou describes how,  “this track is essentially me picking up the metro everyday and seeing that shits going South” and, as with all of his music, comes from a personal place with honest expression.  I love the way Chelou has succeeded in defining his own DIY sound right from the onset, his beautifully constructed songs are based upon layers of tuneful melodies and weightless vocals, and it is this combination that Chelou is fast becoming known and revered for.

Watch this space for news about Chelou’s debut album and check out Damned Eye See above…which you can stream from here,

1 Response to SONG OF THE DAY Chelou – Damned Eye See