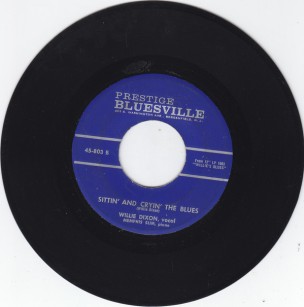 Today’s song never fails to cast a tingly shiver down the spine; I sit, I listen and bask in this glorious music, lost for a few gorgeous minutes in the rich blues goodness.

Sittin’ And Cryin’ The Blues featured on Willie Dixon’s 1959 debut album, Willie’s Blues, and later appeared as the b-side to the LP’s first 45, Nervous.

Accompanying Willie Dixon on this album (and given almost equal credit for his contribution) was Memphis Slim, who played piano on every song as well as writing two of the twelve tracks (Slim’s Thing and Go Easy).

According to the record’s original sleeve notes, the album was impressively recorded in only two hours whilst at a recording session at Rudy Van Gelder’s studio in Englewood Cliffs, New Jersey!  Issued on the Prestige Bluesville label, this album was also reported to have been laid-down in between flights!!…all 12 tracks!!

I’ve also found a great live performance of this song from 1963.  Check this out below: