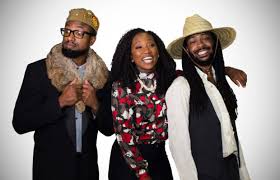 You may already be familiar with the work of Philadelphia’s rock’n’soul three-piece Johnny Popcorn, but this is another new discovery for me!

Describing themselves as a ‘rock band with a lot of soul’ the group as a whole consists of Hezekiah (Vocals), Jani Coral (Vocals), Lloyd Alexander (Guitar), Freshie (Bass) and Clayton Crothers (Drums).

Today, their innovative sounds have opened gigs for the likes of Bilal, Mos Def, Talib Kweli, RJD2, Robert Glasper Experiment, Oddisee, Ladi6, and Kindred & the Family Soul.  This coming January Johnny Popcorn are releasing a new EP which follows the bands 2016 Totum album.  After spending a little time checking out some of their back catalogue, first single Cold World seems to have a different style, taking the band into a new direction which, true to their genre-bending sound, continues to push the band forward into new realms.  I don’t know about you but Cold World got into my head straight away with its heavy, thundering Dick Dale-style guitar and catchy vocal line, I’m liking it! Check it out above.