SONG OF THE DAY Ofo The Black Company – Allah Wakbarr 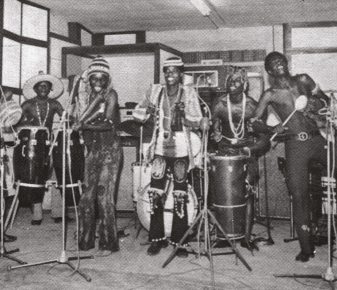 Today’s little psychedelic funk gem comes to you from 1970’s Nigeria and was recorded by a band called Ofo & The Black Company in 1972!

Forming that same year, Ofo & The Black Company was formed by Larry Ifediorama in Lagos, Nigeria and started out as one of the many student bands making the rounds in Lagos during the 1970’s.  What stands this band apart from the many others, however, is the fact that they were one of the few bands lucky enough to get signed after they were discovered by Decca’s A&R man, David Bennett.

Taking the band to London to record their first single in 1972, Allah Wakbarr was to be the bands first release (as well as being their most well-known) and was accompanied by the equally funky Beautiful Daddy on the B-side…and if you ever lucky enough to come across this single, keep it and run as it’s still fetching over £100 for a copy!! I love this sound so much! If you’re interested and want to read more about Ofo & The Black Company, check out this interesting article I’ve found here and enjoy the wonders of Allah Wakbarr above!