SONG OF THE DAY Karl Hector & the Malcouns – Samai Thaqil 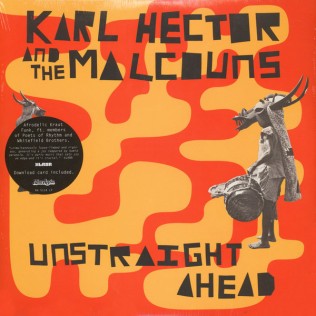 Tying in nicely with yesterdays afro-psych funk belter, I am featuring another great track from a band I haven’t covered in nearly three years!! Shame on me!!!..I need to cover a whole lot more of this raw funk stuff!!..and what a fantastically interesting musical jigsaw this is proving to be as you will see why….

Jan Weissenfieldt, aka JJ Whitefield/aka Mr Hector (see also The Whitefield Brothers from yesterday!) is the Munich-based composer, arranger, multi-instrumentalist and creative force behind Karl Hector & The Malcouns.  He founded the band in the early 2000’s alongside Thomas Myland, Zdenko Curlija and a collective of musicians, all of whom are influenced by the musics of Eastern and Northern Africa alongside Western psychedelia, jazz and funk.

Inspired by the works of the great Ethiopian Jazz musician Mulatu Astatke, Karl Hector & The Malcouns share the same jazz-funk and afrobeat roots as their predecessor and describe how, “We look to Middle Eastern funk and psychedelic fusions and to various ethnic records for sound and phrasing.  We’re trying to combine the global experimentalism of Krautrock with the backbeat of funk.”  (Quote taken from Now-Again Records webpage here)

Samai Thaqil is a gloriously hypnotic, transcendental instrumental track based on a traditional arrangement and taken from the bands Unstraight Ahead album which was released on Now-Again Records in 2014.  Check it out above.