SONG OF THE DAY The Plague – The Face Of Time 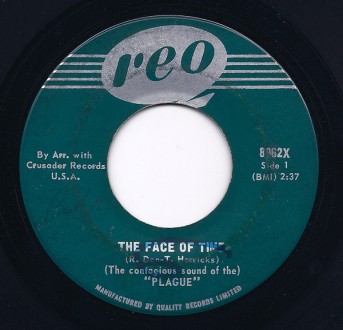 I had originally assumed that there was only one garage rock band called The Plague and that the Albuquerque group I was familiar with were responsible for today’s divine slice of garage rock..but I was wrong!

New Mexico’s Plague released the equally stonking Go Away (the same year that today’s song was released), but it was Thunder Bay’s Plague that released The Face Of Time and that is where we are at today!

Consisting of guitarist Donald Brown, singer/saxophonist Tom Horricks, bass player George Stevenson, keyboardist Joel Stapansky and drummer Lynn McEachern, The Plague were a Canadian quintet who emerged in the mid 60’s.  Recording only a couple of singles in their brief existence, the band released today’s illustrious psych-gem in 1966 on Canada’s Reo Records, following up this single with cover of Billy Edd Wheeler’s High Flyin’ Bird in 1967.

The Face of Time marches along to an ominous bass line, fuelled by a heady mix of menacing vocals and hypnotic organ.. It’s a fantastic example of early psychedelia and one of my favourites, but there are so many favourites when it comes to this genre for me.  A few years ago on a YouTube posting, Thomas Horricks detailed the story behind The Face of Time explaining how:  “I wrote this song with Ray Dee. We recorded it with Gary Paxton in Hollywood. The song was played on (Chicago radio station) WLS and was going to be a ‘hit’, but the record company went bankrupt the next day.”

Whilst The Plague had a relatively short life span, Horricks and Stevenson did eventually find some degree of fleeting fame a few years later when they formed the heavier-sounding Jarvis Street Review and delivered their topical 12-minute acid-rocker Mr. Oil Man in 1970 on Columbia Canada.  Check out The Face Of Time above.