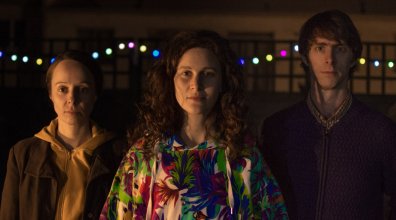 Three years ago London-based Vula Viel released their eponymous debut album as a 6-piece band and whilst the date of its follow-up is yet to be announced, it has been confirmed that a new record is due sometime this year.

Translating into ‘Good is Good’ in Dagaare (the major language of the north-western parts of Ghana and adjoining areas of Burkina Faso), Vula Viel are now operating as a 3-piece, consisting of bandleader Bex Burch, Jim Hart (drums) and Ruth Goller (bass).

Entitled Do Not Be Afraid, the upcoming record saw Bex Burch return to western Ghana so that she could continue studying, making and playing the Gyil, a large xylophone used as a primary instrument by the Dagaare tribe.  With the Gyil once again a prominent and driving feature, Do Not Be Afraid is influenced by the culture and rhythmic traditions of the Dagaare.

Vula Viel have also announced a live date at the Vortex Jazz Club in London on May 27th and if their thrilling past performances are anything to go by this will be worth checking out!  Tickets are on sale now, grab them from here.

Today’s invigorating, upbeat and wholly refreshing tune is titled Yes Yaa Yaa and is the opening track from Vula Viel’s debut album (released in October 2015).  Listen above and check out/purchase the whole album from here.