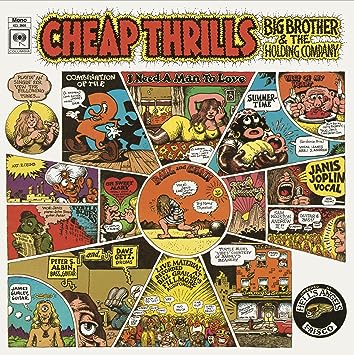 If ever there was a cover that did justice to Big Mama Thornton’s original, this is most well and truly it!  Janis Joplin’s massively powerful rendition of Ball And Chain rips out your heart, beats and batters it beyond repair before returning it in a million shattered pieces..  It got to be one of the most heart-wrenching songs I’ve ever heard and the conviction in Joplin’s delivery is insane! What better song to feature on this Valentines eve I ask you?

Originally written and recorded by Big Mama Thornton in 1961, Ball And Chain wasn’t released until 1968 and was greatly popularised by Joplin who frequently acknowledged Thornton’s musical influence.  According to Big Brother and the Holding Company’s guitarist James Gurley, Joplin first heard the song during a performance by Thornton at a bar in San Francisco.  The group transformed the song into their own slow blues version and performed the song at the Monterey Pop Festival in 1967 (watch above).  The first performance on June 17 was not filmed, so the band was persuaded to perform the song again on the next day.  A year later on their Cheap Thrills album, Big Brother & The Holding Company featured their whopping nine and a half-minute rendition of Ball & Chain and I challenge you not to get choked up by this monster song!..Don’t even get me started on praising Joplin’s performance in the above video! It’s just stunning!!! Go watch!!