SONG OF THE DAY The Birthday Party – Cat Man 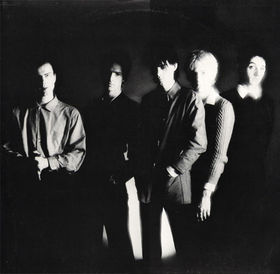 Neglecting for so long what has become one of my favourite listens as of late, The Birthday Party have somehow always slipped just beyond my radar….until recently…

So today’s offering is a mighty fine cover of a song (part) written and performed by the fantastic Gene Vincent in 1957!  With strings that sound like finely tuned cats whiskers and percussion that tap, taps like the soft patter of feline paws, Cat Man is a punchy ode to the slinky and alluring ways of a prowling man as lyrics spell out, “‘C’ is for the crazy hairdo that he wears around/”A” is for the arms, that he’ll sneak around your waist/”T” is for the taste of lips belong to you.”

The essence of Cat Man is nestled in the brisk and snappy beat and Vincent whisks up a proper frolicking frenzy of dazzling guitars to offset the sprightly rhythm section!  The Birthday Party not only captures this energy in their rendition, but offers up a slightly dustier version with more fevered, spiced-up vocals that transports the song down a raw and dirtied track.  In doing so they have perfectly preserved the original feel whilst extending its boundaries into darker realms which is what they Birthday Party does so seamlessly well!  Check it out above.