SONG OF THE DAY Willie Hays – Walkin’ the Streets After Dark 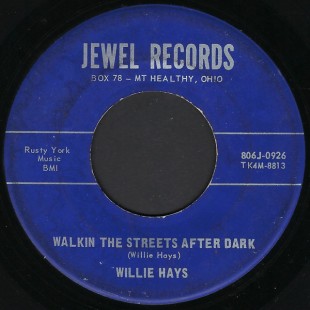 Tonight I present another little haunting jewel, this time from 1966!  Walkin’ the Streets After Dark was a folk/country 45 pressed and released by Jewel Records in 1961.  This Cincinnati label was ran by rockabilly singer/musician Rusty York and though it started out in the humble surroundings of York’s garage in 1961, the business later moved to 1594 Kinney Avenue in the Cincinnati suburb of Mt. Healthy!

Walkin’ the Streets After Dark appeared on the b-side to Standing Here With My Back Against The Wall; both songs penned and recorded by an artist called Willie Hays.  Accompanied by only two other 45’s, this seems to be the extent of Hays’ repertoire and nothing was recorded by him after 1966! This is about all I can tell you about this artist unfortunately, I can’t even find any recordings of his other songs anywhere! I guess this mystery just adds to the appeal, whilst the tragic lyrical content of the song, matched only by its forlorn melody and ghostly backing vocals, makes it quite memorable…and it reminds me reminds me a bit of James Longfeather’s versio on Wayfaring Stranger too!  Listen above.