SONG OF THE DAY Transgressors – Will Power 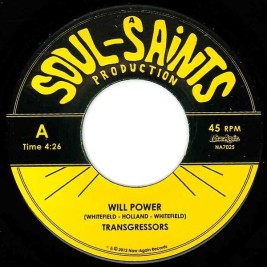 Today’s silky smooth psych-funk nugget has such an authentic sound that you could be mistaken in thinking that this is much more than nine years old! Released by the Transgressors in 2012, Will Power b/w Money For Born, Money For Die, was released as a limited edition 7″ in conjunction with Now-Again’s Original Raw Soul III album.

The Transgressors were a dream team consisting of German guitar player, band leader and producer, Jan Weissenfeldt (a.k.a Karl Hector/The Poets of Rhythm), German drummer and vibraphone player, Max Weissenfeldt (Poets of Rhythm/Whitefield Brothers) and UK DJ/producer and musician, Will Holland (a.k.a Quantic).  I use the term were as I’ve not found any evidence to suggest that they existed much beyond their initial 45, though I have found one more of their singles which features as the title track of a 2014 comp entitled, Beyond Addis: Contemporary Jazz & Funk Inspired By Ethiopian Sounds From The 70s!  It’s time to amble with the funk, check out Will Power above.