SONG OF THE DAY The Royal Dees – Please Some 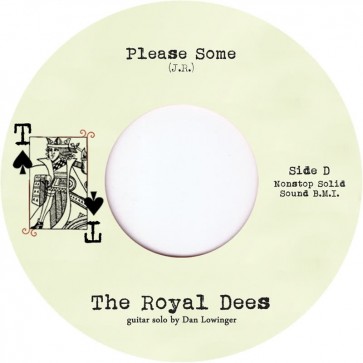 Today’s offering is a right little groover and it’s so easy on the ears! This soulful instrumental carries the breeze on its funky form, and as it drifts into the ears you can’t help but jig to and fro as this bright melody tickles the ear palette!

Released on the fantastic Tramp Records last month, Please Some is the first offering from The Royal Dees…and here’s what Tramp Records has to say about the record!

Read all about it below and if you like, you can grab yourself a copy from here.

“One of the beautiful qualities of the Bellingham music community was the fact that many different groups of various genres could coexist and even perform comfortably throughout the half-dozen venues in this little Northwest college town in the most northwest corner of the most northwest state in the lower 48.

The original roots soulfunk juggernaut of Joel Ricci’s ‘The Lucky Seven’ known in their town as “The Leaders of the Funk Revolution,” attracted a certain cadre of party goer, as did Dan Lowinger’s rugged rockabilly quartet “The Foot Stompin’ Trio”. At Footstompin gigs, Lowinger would be found deftly chicken pickin’ that honky tonk tele’ and was known to impress the audience so much with his licks, they would throw buckets of beer on him as a show of their love and appreciation. It was only a matter of time before Dan and Joel were lucky enough to get the chance to perform together and toured the States for a few years together with a fiery ska/reggae/rocksteady powerhouse also out of the Bellingham area, “The Yogoman Burning Band”. Dan and Joel recorded many demos together and contributed original material to the Burning Band, but the proto-rock of “Please Some”, is pure Royal Dees. This tune, composed and recorded by Ricci, was actually conceived as a submission to Tramp Records and remained unfinished for many years while also suffering from the degradation of the original cassette it was recorded on. The Duo re-recorded again 4 years later when they were both living in Portland, Oregon and that version lives today as side D’s “alternate take” which Ricci found in his cassette archive over the summer. This version also came with it’s own set of audio issues, notwithstanding the botched ending, which we have retained here for you as the loose and roots funky vibe of the whole take justifies it’s inclusion.

Finally, Joel and Dan’s friend and comrade Doug Krebs, who happened to also be a well-loved member of that same Bellingham music community, especially as the go-to sound and mastering engineer, came through in spades to rescue the two pieces and prepare them for proper release on this, the one and only Royal Dees release to see the light of day on the bold and inimitable Tramp Records.”