SONG OF THE DAY The Dragons – Elephant Stomp 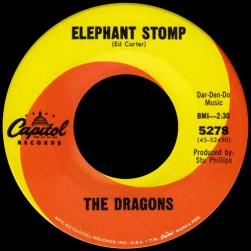 If the groove to this little slinker doesn’t get you, I don’t know what will! This hot little surf-rock stomper is such an ear butterfly!! Released on Capitol Records in 1964, Elephant Stomp was the b-side to its equally ear-bending counterpart, Troll!!

Released by a band called The Dragons, the story behind this band goes as follows:

Daryl Dragon was a songwriter, producer and keyboardist who came to recognise his musical talents and influences from an early age. Best know as the Captain in the successful 1970s pop musical duo, Captain & Tennille, he also performed with his brothers in a band called The Dragons. In 1962, he became a member of the band Charles Wright & the Wright Sounds. Dragon was also a keyboard player with The Beach Boys in the early 1970s. His father, Carmen Dragon, was the conductor of the Hollywood Bowl Symphony and recorded several symphonic works for Capitol Records. His mother was also musical and formed part of a coloratura singing trio who, upon occasion, provided vocals for many of the classic 1930’s musicals. Daryl studied piano whilst growing up and briefly attended California State University at Northridge, before dropping out to form an instrumental jazz trio with his brothers called The Dragons. When the group released Elephant Stomp/Troll on Capitol Records in 1964, its style was a far cry from labelmates, the Beatles, who dominated the charts at the time. In 1967, Dragon became a touring backup musician for the Beach Boys and Daryl Dragon was nicknamed “Captain Keyboard” by lead singer Mike Love because he always appeared on-stage in a yachting cap!  As well as touring with the Beach Boys, Dragon also appeared on a few of their albums, including Sunflower and Holland.  On these he was billed as Rumbo (and later, in 1979, he would name his own recording studio Rumbo Recorders) and on a British single he released in 1970, (Sound of Free”/”Lady), he was also credited on Dennis Wilson’s single as Rumbo.

Elephant Stomp has something so completely fresh and new about it and if I had heard this amongst the Beatles craze at the time, I know where my ears would be roaming! I love it! Check it out above.