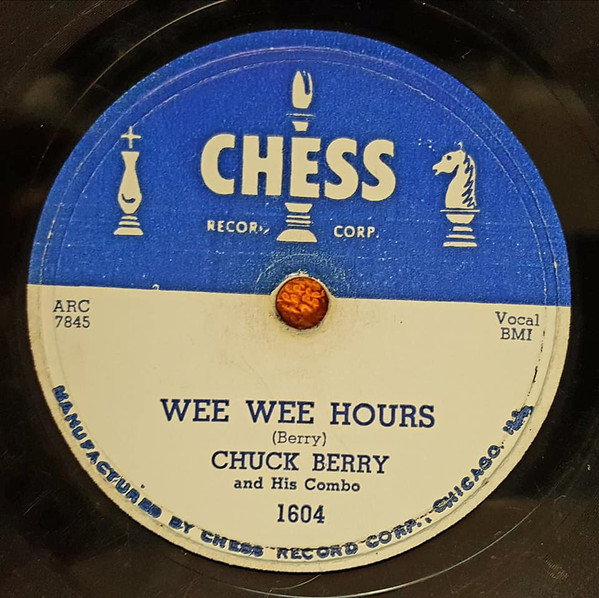 The LP Blog is off for a week after today (returning on 7th May), but what better hands to leave you in than the mighty Charles Edward Anderson Berry, a.k.a Chuck Berry!!!

According to the sources I’ve read, it only took Berry an hour (by his own estimation) to write today’s song, Wee Wee Hours, the bluesy b-side to his debut 45 Maybellene!! Issued on 10″ Shellac in 1955 by Chuck Berry and His Combo, this gorgeous nugget of chinkling-piano-bliss was inspired by bluesman Big Joe Turner’s, Wee Baby Blues

The similarities between Berry’s and Turner’s songs are discernible in the music, but lyrical content is also on the same lines – Turner sang about love at first sight and Berry’s song is a tribute to a woman named Margie he met and fell in love with as a teenager when he was playing music for the USO. “In a wee little room, I sit alone and think of you,” he sings. “Blues are simple and only seem to need the lyrics of a lonely confession to be put to music,” he wrote of the song in his autobiography. “It took the memory of one of the evenings that I didn’t get to see Margie at her window to put the words together and the tune is anybody’s cry for companionship.”

Wee Wee Hours is smoother than a thousand marshmallows on a bed of velvet and goes down a treat every time I listen to it!! I hope you enjoy!! See you in a week!!!