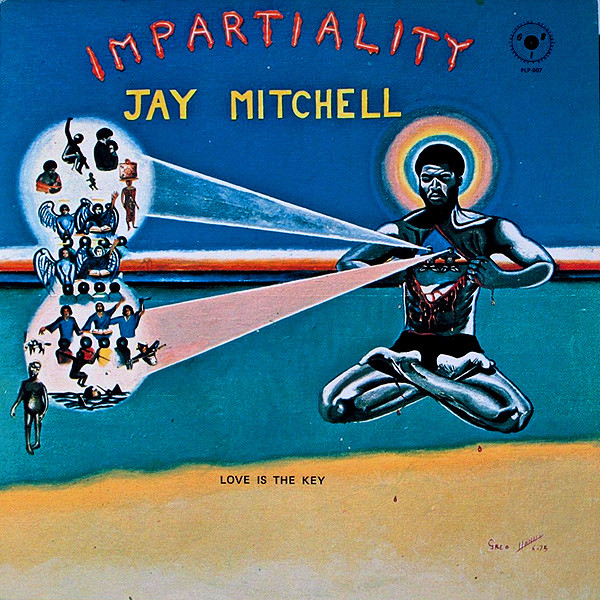 Described as a purveyor of “booty-shakin’ beats and beautiful ballads”, Rupert Jay Mitchell, also known as Jay Mitchell, is possibly one of the best performers you have never heard of!!

Despite his huge following in his Caribbean homeland, he never did quite make it into the world beyond. Who knows just how well-known he would have become if he hadn’t succumbed to homesickness a couple times and headed back to the Bahamas at those crucial crossroads in his career.  An educated guess tells me he would’ve gone far, for he was already performing with the likes of James Brown, Otis Redding, Aretha Franklin and the Jackson Clan and had been signed to Bahamian label, G.B.I. Recording Co. Ltd.

He began releasing music from the early 1970’s and, from what I can gather, he continued to record for nearly two decades! Funky Fever appears on his 1975 album Impartiality, and also featured on Numero’s Cult Cargo: Grand Bahama Goombay 2007 compilation. It literally does what is says on the tin (and beyond) and is about as funky as you can get!! Rhythmic, raw, racy and roasty hot, this track is quite a groove!!! Check it out above.

For a more detailed story on this amazing performer (also Reiki master to boot!), check out an excerpt I’ve pasted in below, which outlines some of his musical history…
*Excerpts from Musical Entertainer, Jay Mitchell
by Glenn C. Nairn originally published at What’s On Bahamas in 2003.

One of his next career highlights came in 1967 when he visited one of New Providence‘s top nightclubs, The Cat and Fiddle, Nassau Street. There he impressed well-known businessman “Father Allen” (Olden Smith). Says he: “He (Father Allen) had a concert with Chuck Jackson and several other stateside artists…The Cat and Fiddle was jammed. But they (the performers) weren’t moving the people. I jumped on stage, grabbed the mike out of Chuck Jackson’s hand and started bugging. Everybody went crazy!

“Father Allen came and said, ‘Hey, young man, who are you?’ I said,’‘Jay Mitchell.’ He said, ‘I brought these people from all the way in the USA and they can’t move the people. And you jump up on the stage and drive those people crazy – I’m going to make you a star!” Indeed, Father Allen endeavoured to assist the young entertainer with his career by becoming his promoter and mentor.

Within that period, the young entertainer bowled over Aretha Franklin, “the Queen of Soul,” when he did””I’m Black and I’m Proud” at a concert she headlined at the Queen Elizabeth Sports Centre. He accepted an invitation from her to perform at the Philharmonic in New York. At the Philharmonic, he met a number of other renown entertainers, including Sweet Inspiration, The Temptations, and The Four Tops. Although he enjoyed working with Franklin, he became homesick, as he missed his family.

Also, he wanted to return home because he felt his growth as an artist was in jeopardy; he feared he would sound like an impersonator of the artists whose songs he performed. “I was going to end up sounding like (a cross) between Arthur Conley, Ottis Redding, and James Brown – right between them, and I wasn’t going to be able to develop a style of my own. I always felt within me that I could use what is in me to bring out what I’ve learned from outside. So I wanted to join these (experiences) together and create my own. “Now when you hear my mouth, you know it’s me…See, I didn’t have that identity. I sounded so much like James Brown, and I did the Joe Tex show with the microphone and stuff. I was not pleased with myself – although everybody else was.”

About a year-and-a-half later he was back in Freeport, where he worked at a number of top local night spots, including Joker’s Wild, Rum Runners, The Sultan’s Tent, and his own nightclub, New Dimension…After a performance at The Sultan’s Tent, he was lauded by an associate of Michael Jackson’s father, Joe Jackson, an entertainment promoter. The associate, says Mitchell, was there with a group for some sort of celebrations.

He recalls that the associate told him he was certain Jackson would sign him on his label, as he was better than all seventeen of the persons whom Jackson was about to take on. Not taking the compliment seriously, Mitchell virtually ignored him. However, around that time, a Philadelphia promoter whom he had engaged submitted his recordings to Jackson who immediately signed him on.

Traveling to Los Angeles, he began a three-year stint under Jackson’s promotion, at which time he resided in the Jacksons’ home. Jackson and his family, including Michael, Jermaine, and their other siblings, treated him as if he were a part of the family. Reflecting on his memorable moments with the Jacksons, he recalls that Jackson once provided him with the opportunity to work with James Brown’s band, while Brown was incarcerated….And performed he did, stunning Bobby Bird the band’s director and others, especially because of his imitation of Brown’s famous dance.

Despite his success under Jackson’s direction, including the production of a CD “Jay Mitchell” produced by Jackson’s recording company (he has a number of other CDs, of which “Another Place and Time” and” “My Prayer” are perhaps the most popular), he again found himself wanting to leave the States. This time he wanted to leave because of intense media pressure; the media dogged him to ascertain the veracity of Latoya Jackson’s accusations against members of the Jackson clan