SONG OF THE DAY Hodges, James, Smith & Crawford – Nobody 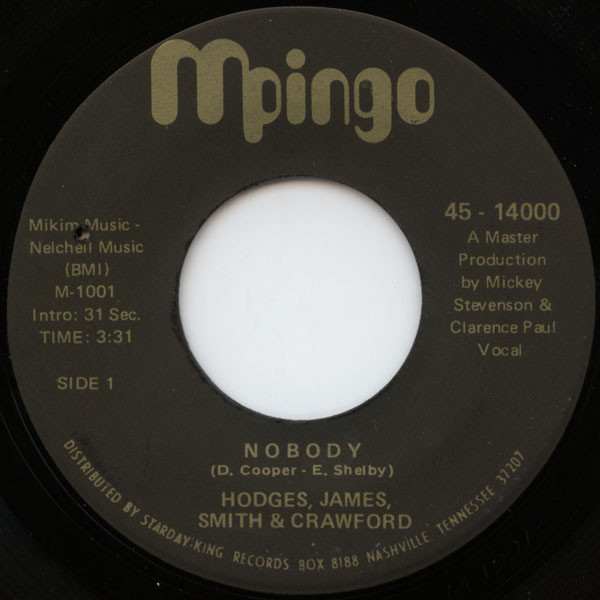 Hailing from LA and active around the early 1970’s, (Pat) Hodges, (Denita) James, (Jessica) Smith and (Caroline) Crawford were an all-girl group with a penchant for cool, cool soul!

The group were the brainchild of Motown songwriter/producer William “Micky” Stevenson, who assembled the band with the intention of rivalling The Supremes! Their first single, cut in 1971, was today’s fireball of soulful funk entitled, Nobody. Issued on the Mpingo label, this track had previously been a hit for Kim Weston who released her version four years earlier in 1967….but there is no comparison when it comes to the impact this song makes as far as I’m concerned!! Hodges, James, Smith & Crawford have nailed this big time, around the galaxy and beyond in fact!! Their version sinks slinky teeth of fire and passion into your ears and brings this song alive..in my humble opinion?

Sadly, this first 45, alongside one more a year later, was the only thing that the band released I believe, with Crawford the only one who continued in music after the band.  Still, as they say, it’s better to have loved and lost, than never to have loved at all…and I do love this version of Nobody!!