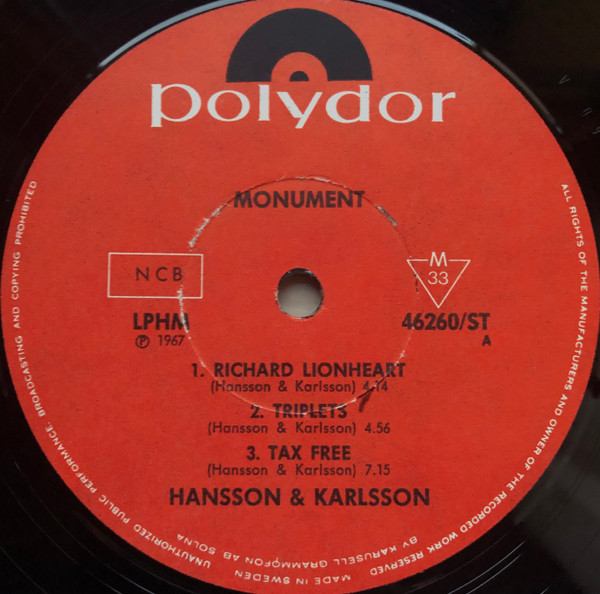 In the two short years they were active, Swedish Jazz rockers, Hansson & Karlsson released three albums and a couple of singles. Despite Janne Carlsson spelling his last name with C, the duo ended up spelling their name ‘Hansson & Karlsson’ because of a mistake made by a poster painter who misunderstood and printed Karlsson with K. This happy accident stuck, as Bosse and Janne thought it looked good, so they kept that spelling!

The band got together in 1967 and specialised in instrumental jazz, especially that of the free-flowing and psychedelic kind! Their music was orientated around improvisations and edgy live shows, with each performance always varied and always different every time!

Towards the end of the 1960’s and about the time they got together, they became acquainted with Jimi Hendrix and performed with him a few times.  Hendrix’s jam sessions with Hansson & Karlsson were legendary and his interest in the duo’s music eventually lead him to recording Hansson & Karlsson’s composition, Tax Free – today’s song!….This track appeared on their 1967 debut album, Monument and was also later covered by Hendrix himself (but this isn’t a patch on the original). I know some say that Hansson & Karlsson’s material became a little ‘cheesy’ and overdone at times, but this debut record captures them at their finest!

Tax Free is packed full of gloriously heavy beats and wavering contrasting lulls, which draws out their rhythmic impact perfectly. The sinuous melody leads you across many a sonic landscape and the altering terrains, making this seven minute track feel like a blink! Check it out above