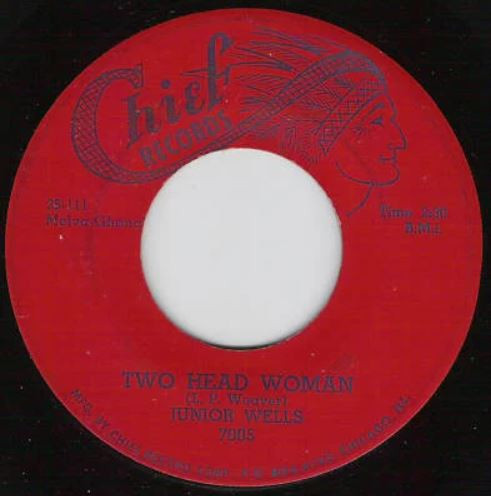 Being a mammoth fan of Amos Wells Blakemore Jr’s. (a.k.a Junior Wells) 1965 Hoodoo Man Blues album, its the one I know the best given his rather extensive repertoire. I’ve often delved into more and his music never disappoints. Celebrating a career that spanned over four decades, Wells was a superb blues vocalist and harmonica player who spent most of his musical days in Chicago.

He made his first recordings for States in 1953 and continued to record regularly up until his death (1998), often in the company of guitarist Buddy Guy from 1965 onwards.
He also played with a wealth of other artists such as Bonnie Raitt, The Rolling Stones and Van Morrison (to name a few).

The locomotive pull of Two Headed Woman hurls this 12-bar into another dimension, forever driving this beast on with relentless energy. It’s a lively one and I love it for that, I also love Well’s vocals, but this doesn’t falter no matter what I listen to of his!! Backed with the swanky sounds of Lovey Dovey Lovey One, this 45 was issued in 1957 on Chicago’s Chief Records (love the label design) and was Junior Wells’ first release on this label! Enjoy!!