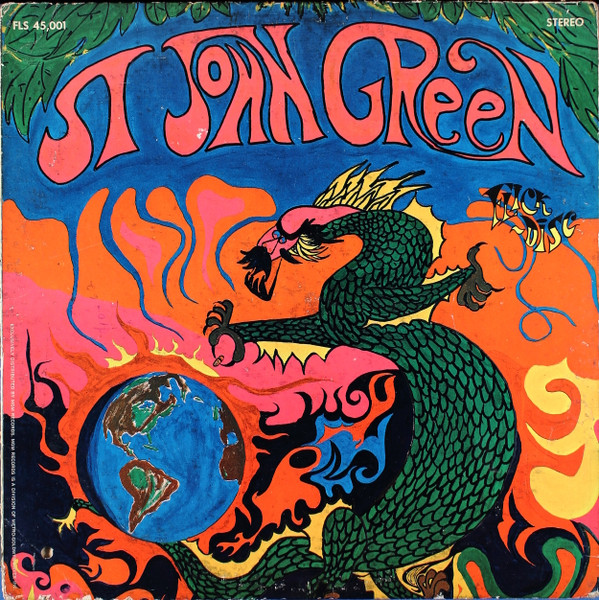 I always feel so chuffed when I stumble upon something by accident and it turns out to be something rather interesting!! You have a little delve and then realise there’s more where this came from and it all gets rather exciting! Such is the case with tonight’s offering! I have just skimmed through the rest of the album from which this song comes and it sounds pretty whacky and wonderful so far!!

St. John Green were a psychedelic rock from Los Angeles, California who emerged from Topanga Canyon in 1967 when keyboardist Mike Baxter and singer Vic Sabinto got together. Soon joined by Ed Bissot on bass, the line-up was completed when guitarist Bill Kirkland and drummer Shel Scott came along. At the time of their formation, they were all students at Pasadena City College and though Bissot originally wanted to use his pseudonym “St. John” for their band name, they eventually compromised and named the band St. John Green.  Sadly, they only released one full-length album and this was their 1968 self-titled venture!

Produced by singer/songwriter/producer/musician, Kim Fowley, and record producer/ arranger/songwriter/ musician, Michael Lloyd, this LP is catergorised under the psych-rock genre, though there is so much more going on within these boundless parameters!! It’s extremes flip between the dark poetic realms of Jim Morrison and the sunshine peaks harmonica-fuelled ditties where lyrics drift in and out of the bizarre! It’s truly the most kaleidoscopically curious sound – one that I could imagine being revived, revisited and re-loved all over again!!!! As far as I know this record has never been reissued and it’s easy to see why it’s been described as: “by turns frightening, dark, funny and stupid as it reeks of bad trip freak outs in matte black painted rooms with no furniture lit only by a single red bulb and burning cigarette ends…. weirdly dark and epic..” ..hmm!!

St. John Green disbanded in 1968, shortly after their only release, but I kind of like that they did that. This makes their sole offering much more poignant and all speculation on what else they could’ve come up with only fills a longing mind with unfulfilled wondering!!….All we have to focus on is this one record, but my oh my, what a mighty beast this is!!!

Canyon Woman is definitely a stand-out track for me and I dare say if you give it a blast, you will see what I mean?! It’s got a slinky r&b streak to it and for some reason it just keeps making me think of Nina Simone’s See Line Woman!! As the song draws to a close its gets progressively animated as both voice and melody builds and rises, but when that drop comes and everything falls back, it really hits you and dynamically you don’t half feel fulfilled! It’s a little beauty!

Check it out above and if you fancy it, you can listen to the whole album below on the Youtube link I’ve included…