SONG OF THE DAY George Perkins – Cryin’ In The Streets 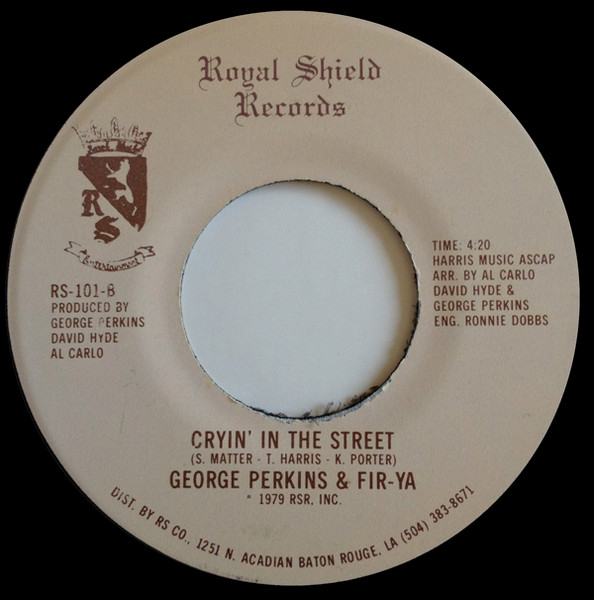 George Perkins was a singer and label owner born on 25 September 1942 just outside Baton Rouge in Denham Springs LA. He started his singing career, as so many did in those days, in the church as a member of the local Silver Stars quartet. Reading various sources about Perkins, I found this quote where he described how: “When I was 16 or 17, gospel was real hot, I started a quartet, the Silver Stars, with Frank Turner and a couple of my nephews. We did a lot of Soul Stirrers songs.”

According to George, the group cut two 45s for Ebb Tide’s (Ted Harris) Golden label before recording what is probably one of his best known songs,  Cryin’ In The Streets.  This track (today’s track) was written in direct response to the assassination of Martin Luther King.

Speaking of the song in another interview I found, Perkins described how, “the lyrics were about the Dr. Martin Luther King assassination and the civil rights movement. I arranged the song, and it came out on the Golden label. WXOK in Baton Rouge started playing it. It stayed at No. 1 there for two months. Then it started to hit all over the South, Memphis to Florida.”

Produced by Ebb Tide (a/k/a Ed Harrison), the record was first released locally in Baton Rogue on the Ebb Tide label. It got plenty airplay and was soon picked up by Silver Fox (one of Shelby Singleton’s Nashville labels). With that push, Cryin’ In The Streets went national, getting up into the lower part of the pop Hot 100 charts and into the top 20 R&B. Perkins and his group did a lot of touring off that record and made an album to be issued on Silver Fox; but they never received royalties for the single and refused to give Singleton the album. Soon thereafter, the label owner went into bankruptcy, leaving Perkins holding the (empty) bag. Thank goodness the 45 has since seen a release!

I really love how the instrumentation and arrangement are stripped back and organic, putting the emphasis on the two lead vocals of Perkins (the lower of the two) and Frank Turner (the high tenor). It’s hard not to be moved by the emotion in their voices and the stirring message they deliver with earnest.

Today’s song is one of many great songs that Perkins released over his decade-long career, some of which were issued under his own label Royal Shield Records (a label named after the Royal Shield Insurance Company who he had worked for – and continued to work for!).  More recently, New York’s Tuff City Records have reissued a 22-track compilation entitled Cryin’ In The Streets which features a grand selection of rare and unreleased Perkins tracks! It’s the perfect place to head to if you want to hear more! I have just been reaping the rewards from checking this compilation out myself! You can find that here.