SONG OF THE DAY Lolla Collins – Save the Children 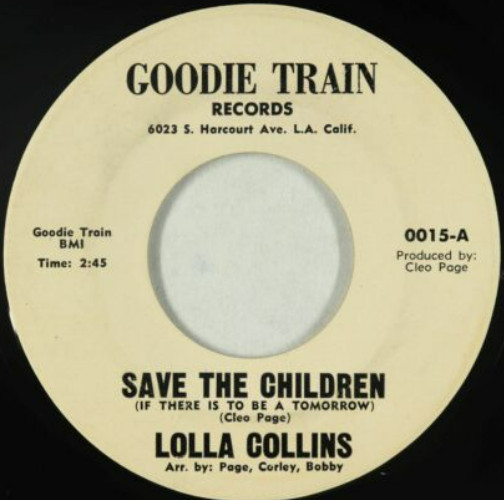 Lolla Collins (also spelt as Lula Collins) is something of a mystery, and so far I’ve failed to find too many definitive details about this powerful vocalist. What I do know is that she was recording and in the mid-1970’ss, releasing about three LP’s and a handful of 45’s throughout this decade.

I also now know that Numero Group have recently reissued today’s song (last month), re-introducing this epic beast back into the world once more!! I just can’t seem to find it’s original issue date, however. Another interesting fact about today’s song is that it was first issued on a label called Goodie Train – this name I recognised from a recent post I’ve put up a couple of months back. Goodie Train Records was owned by singer-songwriter and producer, Cleo Page – I love how these things piece together!!

Save the Children (b/w Me and My Junkey Man (It’s Hell For Me)) is mighty!! Simple as that! It’s all about the funk, with a thundering groove that is more than a match for Collins’ monster voice!! Nice!! Check it out above.