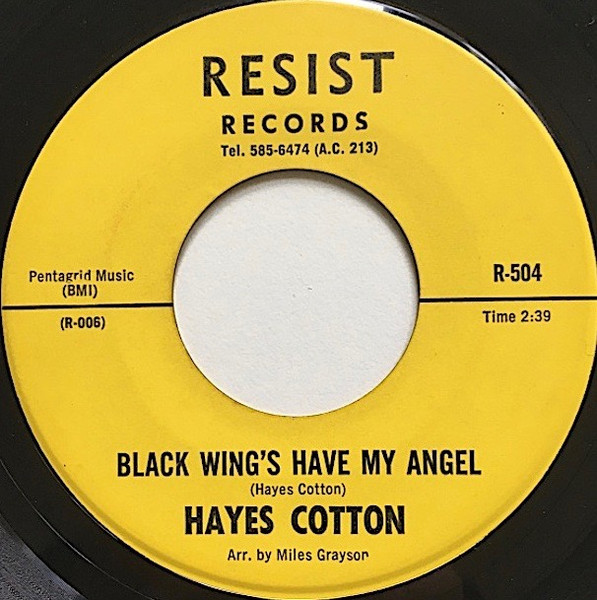 Hayes Cotton rose to fame after winning a contest for unsigned talent on LA’s R&B radio station, KKBT “The Beat” in the early 1960’s. From his humble beginnings in Mexia, Limestone County, Texas, Hayes Cotton fulfilled his childhood dreams when he earned his Bachelor of Science Degree in Engineering. This took him to California where he was offered a role in the aerospace industry, making him one of the first black American civil engineers in the Federal Aviation Administration. For the next 25 years he taught airport planning!

Alongside his academic talents, Hayes was also a great singer-songwriter with a unique voice that he often liked to exercise in recording studios. After winning the talent contest in Texas he became an overnight celebrity in Hollywood and went on to release a couple of 45’s and an album in the mid-1960’s.  His song Secret Lover (also the title of his LP) became a very popular tune, playing out over the L.A airwaves for many years…(thought I’ve got to be honest, this is way too straight-soul for me!!).

Black Wing’s Have My Angel was the b-side to one of his only two 45’s, which was released in 1966 on LA’s Resist Records. Accompanied by I’ll Be Waiting on the A-side, this track may dwell in the realms of Northern Soul, but stands out for those raw vocals; these give the track a far more edgier feel, which is probably why it bypassed my Northern Soul radar – I’ve never taken to very much Northern Soul. The harmonica embellishments also help, but its his voice! I like his voice in this track and how they remind me a bit of Tim Buckley with their tunefully drawn-out qualities! Check it out above.