SONG OF THE DAY Fontella Bass – Talking About Freedom 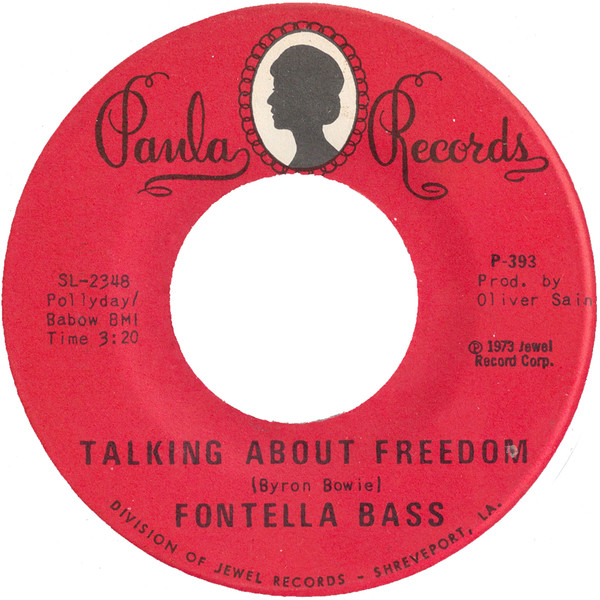 Music was gifted to Fontella Bass from an early age and before she was even six years old, she had was already singing and playing piano to a standard way beyond her years. Possibly best known for her 1965 hit, Rescue Me (a song which she pushed to be identified as co-writer, but unfortunately never got recognised), she was surrounded by music – marrying jazz trumpeter Lester Bowie, being the daughter of gospel singer Martha Bass and sister of David Peaston.

Her voice was magic, even at the age of six, when she she sang in her church’s choir, and by the time she was nine, she had accompanied her mother on tours throughout the South and Southwest America!

Her first venture into the world of recording came with the support of Bob Lyons, the manager of St Louis station KATZ.  Bass recorded several songs, releasing through Bobbin Records, all of which were produced by Ike Turner – her 1964 single, Poor Little Fool, also features Tina Turner! It was also during this period she met and subsequently married the jazz trumpeter Lester Bowie.  Two years after her initial signing, Fontella Bass ended up auditioning for Chess Records, who immediately signed her as a recording artist to the subsidiary, Checker Records. This was around about 1965! She continued with this label for a good few years and it wasn’t until the early 1970’s that she started recording for Paula Records (a subsidiary label of Shreveport, Louisiana-based Jewel Records. In 1973 she released single, It’s Hard To Get Back In, which was accompanied on the b-side by Talking About Freedom. This flip side is a powerful and emotive soulful ballad, accented by the rise of strings and defined by Bass’ expansive vocals. It’s definitely one of my favourite tracks by Fontella Bass!

The song also appeared on her her second LP, Free, which was released in 1972, but sadly didn’t do as well as anticipated. After this record flopped, Bass retired from music and raised a family, but this wasn’t the end for her recording career thankfully. She went on to record a gospel album with her mother and brother in 1990, as well as a few other recordings on independent labels over the coming decades! Her voice was too good to be wasted, so it’s a good thing she never gave up singing completely!!