SONG OF THE DAY Bo Diddley – Prisoner of Love 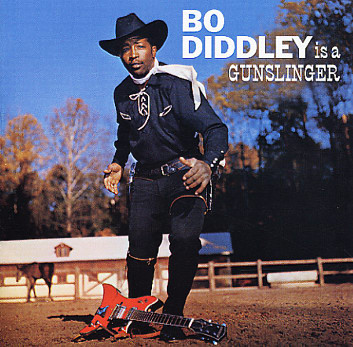 This sonic monster will swallow you whole, capturing you first with its snappy piano teeth, before stealing you away with it galloping rhythm; but to be consumed by such a mighty beast is not a bad thing! Especially when Bo Diddley is at the controls!! Prisoner of Love appears on Diddley’s fifth studio album, Bo Diddley Is a Gunslinger, which was issued in 1960 by Checker Records.

The album’s name comes from opening track, Gunslinger and the record’s artwork sees Bo Diddley dressed in cowboy-style clothing as he stands poised, armed with his guitar at the ready!! The songs for Bo Diddley is a Gunslinger were recorded from October 1959 to February 1960 and later copies actually featured some previously unreleased tracks that were intended for the album. Today’s song is one of those previously unreleased songs! Listen above.