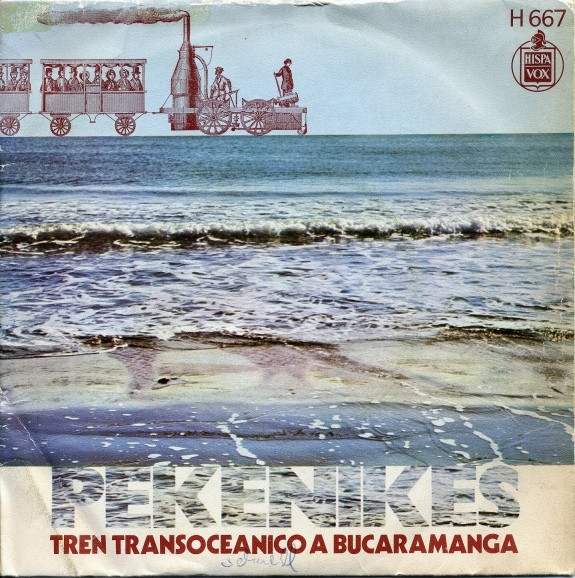 The Pekenikes were a Spanish psych-pop outfit that emerged in the late 1950’s. Signed to Spanish label Hispavox, the group released many albums and single over their lengthy career.

Founded in 1959 by by brothers Alfonso Sáinz and Lucas Sáinz, the band also consisted of Spanish, Colombian and Filipino singers and musicians. This blend proved to be a winning mix and after setting out covering various other songs, they eventually settled as an instrumental outfit. Five years later they were opening for The Beatles in Madrid and released their debut album a few months later.

Throughout the years multiple musicians passed through the band, but the essence of what they were about remained, making Los Pekenikes one of the most influential Spanish groups of all time!

Tren Transoceánico a Bucaramanga was released as a single in 1970, but I have just come across an article which explains that this song is actually a copy of one of their earlier compositions from 1962! Entitled Viento Inca (Inca Wind), this track appeared on their Madison & Locomotion EP and would have been recorded with a different line up of musicians (though some remained constant throughout).  Hearing this earlier version now, I’d have to say I’m liking this a bit better, but its good to see how it was adapted nearly eight years later!

Check out both versions above and below (the one at the bottom of this page is the 1962 one!!)