Well, I’m a bit late to this party it would seem, but what a party is it!! Super Best Friend Club make a really big sound! A really big, explosive and erupting sound which keeps you guessing. I like that! I like that in anything, the art of surprise and this sextet are full of thrills!

Their music is skittish and frantic, unravelling in cascades of loony sounds; a detail I appreciate and one that is further enhanced by their intricate flair for detail and contrast. One moment you are you gliding on the highs of a soaring sonic rocket and the next you are falling like a feather, slow and effortless. This rich dynamic fusion is delivered with just the right balance of loud/soft and I like how this (seemingly) random blend of sound spills out in these ever-shifting shapes of psychedelia, spiritual jazz, synth pop!

Super Best Friends have been about for nearly a decade now, self-releasing their first single in 2012. They are made up from an interesting bunch of musicians, all of whom operate in other musical projects. Front man / multi-instrumentalist Jonah Brody is from the Sam Lee’s Band, drummer Maxwell Hallet is from The Comet is Coming, bassist Jordan Copeland is from Hot Head Show and both guitarist/synths Jean de Talhoue and percussionist/vocalist Joshua Green percussion/vocals are also from the Sam Lee’s Band.

Their self-titled debut album was self-released in 2013, followed by Loveblows which came out four years later. So far their are only two records, but a third is a possibility?? I guess its tricky when the band have other projects running! Love Is A Morning is taken from Loveblows, and I’m really enjoying the galloping melody and kooky vocal layerings!!

Check it out above and find both of the band’s albums below for your listening pleasure!

Sunshine! Super Megatron! and Doom really stand out for their rhythmic prowess (find them on this album)

Humans is really good..I like how lively it gets! 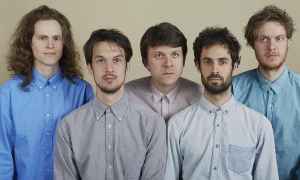