SONG OF THE DAY Felix And His Fabulous Cats – Savage Girl 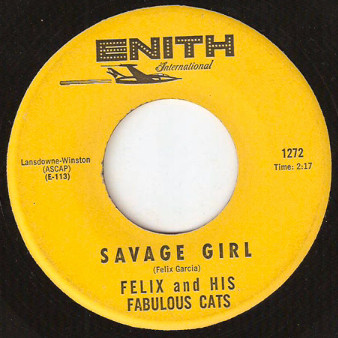 By the time Felix And His Fabulous Cats had unleashed the smouldering charms of Savage Girl on the world, there were already a couple of sought after 45’s circulating.

Initially recording on his own, Felix Garcia was joined by his Fabulous Cats in the early 1960’s. Alas, however, they only issued one single in 1964 and that is today’s mighty feline number and this was backed with Hey Tiger  on the B-side.

Felix Garcia released his first 45 (Two Tacos b/w Crazy Fingers) in 1959 and then followed that up with  Acapulco b/w Chi Chi in 1961 (sadly I cannot find these anywhere to share with you). In fact, it’s been a tricky one trying to locate any information about Felix Garcia full stop, so if anyone can help, please do?

What I can tell you is that today’s song seems to be the most valuable of all his releases and is currently fetching in the realms of £200-300! Though, if I found a copy of this, I’d not be selling it for anything! The single was released on a label called Enith International and the only thing I can really fault with it is that its not long enough!! At 2:16 minutes, there needs to be more!! I love its heady, intense and impassioned flamenco-tinged sound! Enjoy!