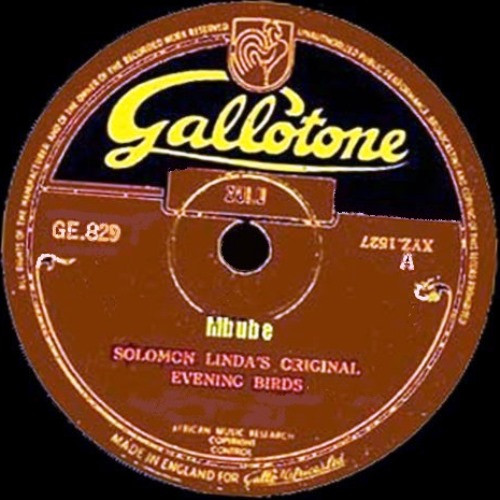 I know it happened a lot in the past when songs were covered and then went on to be really popular, but the original artists didn’t even get credited, let alone get any royalties…but I never realised today’s song was a cover – nor that the artist didn’t get much recognition (for years) from a lot of the places that thrived off its existence!!

Solomon Linda’s Original Evening Birds were a South African vocal group formed by Solomon Linda in 1933. During their musical career, the band often took part in singing competitions, for which they were unbeatable (according to historian Veit Erlmann) and, whilst the group disbanded in 1949, they are forever known as pioneers of the musical genres Mbube and Isicathamiya. Together they celebrated a handful of singles in the mid-to-late 1930’s, early-1940’s, but are rarely credited to the song we all know from, well, there are soooo many versions, but in my case it’s Tight Fit’s cover.

This band are (now) known internationally for today’s song, Mbube. Released in 1939, Linda’s original was written in isiZulu, while the English version’s lyrics were written by George David Weiss. Mbube (meaning Lion in zulu, with the chorus singing “uyimbube” which means “he is the lion“) has been adapted and covered internationally by so many pop and folk revival artists in the 1950’s and 1960’s….and beyond!

Pete Seeger recorded it in the US in 1950 (with wimoweh for the chorus) and was one of the few artists who gave credit to the original. He even went on to arrange that the rightful money went to Soloman and all the royalties he made from this track would also go to him! The track was recorded as Wimoweh by the Weavers in November 1951 and published by Folkways Music Publishers in December 1951. Other artists who also recorded versions include, Henri Salvador, Jimmy Dorsey, Yma Sumac, Noro Morales, Miriam Makeba, and the Kingston Trio.…but there are many more!!

In 1961 the Tokens released a version which became a number-one hit and in 1982 Tight Fit’s version reached number one in the UK!!…growing up as a child in the 80’s this is the version I remember!

Now I know the original, nothing comes close and its not just because I want to appreciate the first ever version, but now I can hear where all those stunning vocal yodels came from!! Listen to the warm layering of male voices as they come together in this wonderous union of melodic chants! Listen to Soloman’s unique howls and yodels!! This exciting sound is theirs and I love this version by far the most!!

This track has been recorded or adapted hundreds of times across the years, but only in the 1990’s was Solomon Linda finally recognised as the original author AND then it took until 2006 for Linda Solomon to actually be credited as the writer! Sadly Solomon Linda wasn’t around to collect the recognition he so rightfully deserved, but at least now the world knows the origins of this song!

I hope you enjoy and if you fancy reading more, I’ve found a really good article here!