SONG OF THE DAY The Tropics – As Time’s Gone 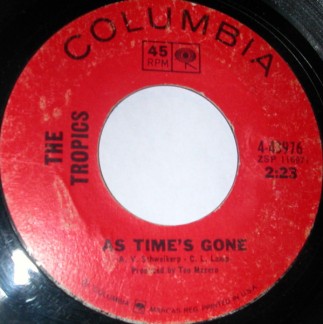 The Tropics emerged from Tampa, Florida in 1964 as a five-piece garage-rock outfit.  Soon after their forming the band began touring all over Florida and Southeastern US, playing alongside The Who, The Young Rascals, Herman’s Hermits, Heinz Heinz and Dad.

In 1966 the The Tropics won the International Battle of the Bands competition, taking first place over more than 1000 other bands and gaining a recording contract with Columbia Records.  Part of the prize was the production and release of their first single Take the Time, which was produced by jazz saxophonist, composer and record producer Teo Macero (who also co-produced Miles Davis’ Kind of Blue).  As Time’s gone was the contrasting, more rockier the b-side to the this single and, with its distinct vocal “woops,” rolling pace and cutting guitar, was the perfect time-themed accompaniment to The Tropics smooth debut.  Check it out above.