SONG OF THE DAY Arthur Crudup – My Baby Left Me 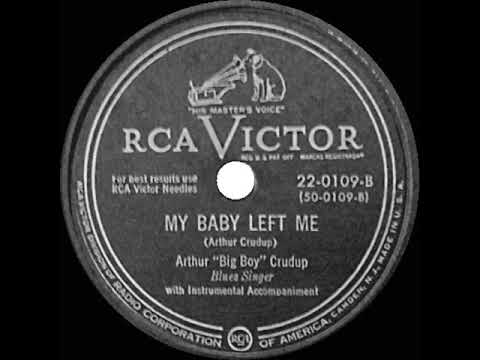 “Down in Tupelo, Mississippi, I used to hear old Arthur Crudup bang his box the way I do now and I said, if I ever got to the place I could feel all oldArthur felt, I’d be a music man like nobody saw.”  Elvis

Following on a little from yesterday’s song, it has been said that B.B. King’s Early Every Morning gives a nod to Arthur Crudup’s, My Baby Left Me via its snappy, rolling drum-driven into – if you take a listen you can hear the similarities and see what I mean!

Covered by Elvis (and what a mighty rendition it is to!) for the b-side to his 1956 single, I Want You, I Need You, I Love You,  today’s song was originally released by Arthur Crudup, a.k.a Arthur “Big Boy” Crudup, in 1951!!  Often referred to as the “Father of Rock’n’roll” due to his influence on Elvis Presley, it was Crudup’s, That’s Alright (Mama) that Elvis first released as his breakthrough record! Since then dozens of artists have released countless renditions his work and today’s track, My Baby Left Me, has been covered numerous times, by artists including the likes of Wanda Jackson, Creedence Clearwater Revival, Chris Isaak, Elton John, The Saxons plus so many more!

Beginning his musical journey as a blues singer in the early 1940’s, Arthur Crudup started out in and around Clarksdale, Mississippi.  His career spanned over a good 35 years and, signed to RCA Victor’s Bluebird label, his prolific works has helped to sculpt, influence and shape the sounds of blues ever since….If you want to discover more, I’ve just found a good article about this blues legend which you can read here.

My Baby Left Me is one of my favourite Crudup songs, its locomotive chugging rhythm drives me miles away every time without fail! Listen above.