“All of this was recorded by accident, I never thought it would be a single. You wouldn’t really call it performing. Doorsteps, porches, back yards, alleys. I did a lot of work in church. My mother told me that even before I was born, she had a dream that she had a child who was a musician.” Stevie Wonder.

It’s crazy to think that this mighty big sound was recorded by a 12-year old!! Stevie Wonder is a wonder, that’s for sure!!! On June 22, 1963 Stevie Wonder appeared on a mainstream pop chart for the first time!

Issued on the Tamla label, the song was written and composed by Wonder’s mentors, Clarence Paul and Henry Cosby, Fingertips was originally a jazz instrumental recorded for Wonder’s first studio album, The Jazz Soul of Little Stevie (hear the instrumental below).  The live version of the song was recorded in 1963 during a Motortown Revue performance at the Regal Theatre n Chicago, Illinois. Containing only a few verses of improvised lyrics, Fingertips is essentially an instrumental piece, meant to showcase Wonder’s talents on the bongos and the harmonica (for which these are impeccable talents!). 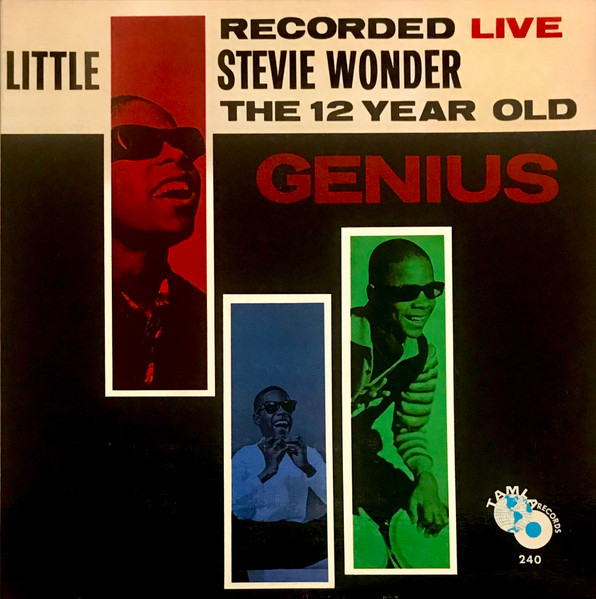 The live version of this track was released on May 21, 1963 as a two-part single, with Part 2 (with the encore) as the B-side. The live version of the single also featured on the album Recorded Live: The 12 Year Old Genius, which was cut at that Chicago date when Wonder had indeed just turned 12. By the time the album was released, he had just become a teenager: Stevie celebrated his 13th birthday on May 13.

Both the studio and live versions of the song featured drumming by Marvin Gaye, who had been playing drums for Wonder and other Motown artists (and would become a big Motown star himself!!!)….What a line-up!! Enjoy!