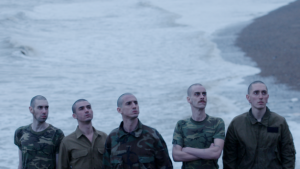 The Fat White Family’s new album is due out later this month and I dare say it will be an interesting listen.

Titled ‘Songs For Our Mothers,’ this ten-track album will be featuring ‘Satisfied,’ a song co-produced by Sean Lennon, as well as taster track ‘Whitest Boy on the Beach’ which is due out tomorrow.

Recorded at the Trashmouth studios in New Malden and Marcata Studios in New Paltz, New York, their new record comes nearly three years after debut LP ‘Champagne Holocaust’ and looks set to continue in the same bizarre and outlandish manner for which the Fat Whites have become so well-known for, I would expect no less!  Check out below what the band are saying about their new release:

While our first LP might be considered an assault, a spasmodic outpouring of disdain generated by the utter tedium of life when it is found unlivable, Songs For Our Mothers is an invitation. It is an invitation, sent by misery, to dance to the beat of human hatred. In it we ask that you take us gently by the hand as we lead you on a journey, a journey that leads us from the blinding white heat of a midday Mediterranean shore, to the embattled boudoir of Ike and Tina Turner, from the clotted grey droll of Dr Harold Shipmans waiting room, to the final hours of the Third Reich in the Berlin bunker.

It is as much a catalogue of our obsessions as it is a sensual odyssey; sex, drugs, politics, death, the Northern Irish A-lister Sam Neil, it’s all here, all that’s left to do now is breathe it in.

‘Songs For Our Mothers’ will be released on January 22nd. Pre-order your copy here