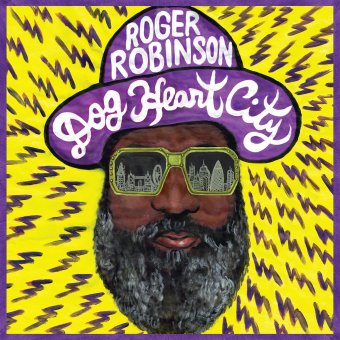 If Linton Kwesi Johnson and Tricky are your vibe, you may just find today’s offering right up your street!

Roger Robinson is a writer, poet, singer and musician who lives between England and Trinidad.  Often merging the two locations in his sound and creations, he describes himself as “a British resident with a Trini sensibility” and was recently chosen by arts organisation Decibel as one of 50 writers who has influenced black-British writing over the past 50 years!

His art takes on many forms including spoken-word and poetry, but he is also known as a teacher, scholar, thinker and activist and is considered a “serious man with a great sense of humour.”

His latest album is packed full of songs telling tales about survival in a Dog Heart City, a title he has assigned to the album itself, his inspiration and motivation for writing this he claims was to “make the invisible lives visible: giving people affected by gentrification, racism, unemployment and low wage work a sense of authority and aesthetic nobility”.

Dog Heart City is a recommended listen, the music is superb and the lyrics are much more than just food for thought, they are there to be digested and acknowledged, offering an insight into some of the issues that effect our society today.  Ruins stood out initially to me because I instantly liked the vocal style, the poetry and the way the music enhances the sentiment.  Check it out above and listen/purchase the rest of Dog Heart City from here.