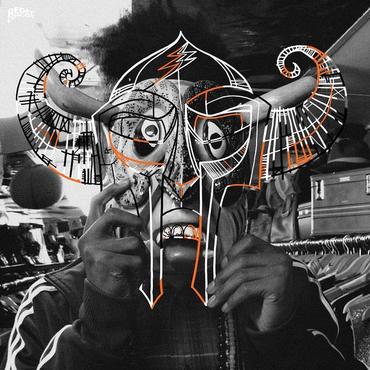 Eight years ago Paris-based production duo, the Union, got together with MF Doom for their Analogtronics record; collaborating on the single, Coco Mango.

Shortly after the track was then  remixed by DC’s, Damu the Fudgemunk for a limited 7″ that sold out in two weeks and very quickly became a rare and sought after single.

Being a DOOM and Madvillain fan, Damu took to the opportunity to lay 2 remixes both inspired specifically by Madvillain’s track “Rhinestone Cowboy”.  The results are commonly dubbed CoCo Mango Sliced (power outage mix) and Coco Mango Diced (boyscout mix) – Coco Mango Sliced featured guest vocals from Boston’s Insight the Truncator.  Fun fact: While producing the remixes, Damu lost power in his studio literally after recording a demo of the the first mix and lost the unsaved beat in his MPC.  That 2 track demo would become what was published, hence the (power outage mix), but instead of recreating the exact same beat he lost, Damu took the same sample and put a different swing on it, giving us remix number 2 (boyscout mix)

Since its original release these remixes have become known as “the DOOM record you’ve never heard” due to its short shelf life.  Though a repress would’ve made perfect sense in 2011, it’s now 2019 and these tracks have recently been reissued!  The cover art was designed by well-known artist Joe Buck of De La Soul and pays homage to DOOM using his signature hand drawn technique accenting a classic masked photo of Damu the Fudgemunk.

Coco Mango Sliced (Boy Scout Remix Feat Insight) is my favourite version, the beat is so heavy and the vibe is dark! Check it out above, purchase your copy of the single from here and check out the accompanying video below!