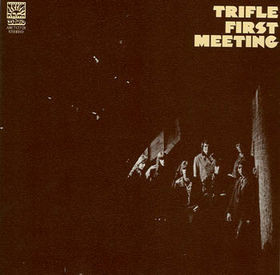 Today’s track has hip hop sample written all over it, so I wasn’t surprised to discover that this has been used numerous times by various artist over the years.

Featuring on the one and only album the jazz/prog-rock band, Trifle ever released, New Religion was issued on the Dawn label in 1971.

Trifle were a short-lived group that evolved out of George Bean and the Runners, an outfit fronted by led by vocalist George Bean. Bean had recorded a number of solo singles for Decca Records as far back as 1963 and had also made further solo recordings for CBS Records in the late 1960’s and garnered more fame after appearing in the film, Privilege alongside singer Paul Jones.

The original Trifle line-up recorded one single for United Artists, which was a cover of the Beatles’ All Together Now. Other members passing through the band included drummer Robbie Ryan and trumpeter Hubert Grillberger.  Signing to Dawn Records in the late 1960’s, Dick Cuthell joined the new formation on trumpet/flugelhorn, accompanied by Chico Greenwood on drums and Alan Fealdman on keyboards. This final line-up of Bean, King, Martin, Cuthell, Hitchen, Greenwood and Fealdman commenced recording sessions for the band’s sole album at Pye Studios in London’s Marble Arch in September 1970. Their sound was evolving into the realms of jazz and rock, with the band now likened to acts such as Manfred Mann’s Chapter Three and Colosseum.

The first fruits of the recording sessions appeared in November 1970, when a different version of Old Fashioned Prayer Meeting was coupled with Dirty Old Town and issued as a single. Their debut album  was well received upon its release in February 1971, but any promise the group may have offered was short-lived, when George Bean sadly died some months later. Pat King later joined the group Shanghai and eventually Manfred Mann’s Earth Band, whilst Dick Cuthell became a highly respected session musician, working with acts such as Rico Rodriguez, The Specials, John Martyn, The Eurythmics and Elvis Costello.

New Religion is the best track (for me) I’ve heard from Trifle, I love that riff!!!! I’m not so much a fan of their prog-rock sound, but this track has a killer groove and it’s clear to see why the likes of Madvillian (Avalance), Kid Cudi (Come Around), Eden (So Long), Killah Priest and Shaka Amazulu the 7th( B4RC0D3) and Doc Delay & Godforbid Baltimore to Buenos Aires have all sampled it! Check it out above.