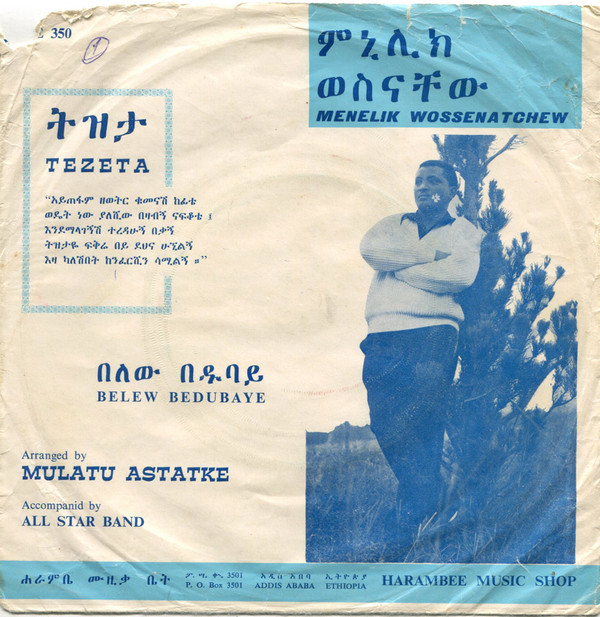 Tezeta is a song originally constructed by the wonderful Mulatu Astatke sometime in the late 1960’s, early 1970’s. Translating as ‘nostalgia’ or ‘longing’, the song is composed as an instrumental piece by Mulatu, but today’s cover has a vocal element, which I am particularly enjoying as the warming sun’s rays cast their beams into my kitchen. It’s an incredibly relaxing piece whichever version you listen to and is simply beautiful. I can’t really put it in a better way.

Sang by the great Ethiopian vocalist, Menelik Wossenatchew, this version lends itself perfectly to his consoling voice…it’s something I’ve not been able to get out of my head for the last few days.

Menelik Wossenachew was born in 1940 in Addis Ababa, Ethiopia and in 1960 he joined the Haile Selassie I Theatre Orchestra.  He was fist hired as a backup vocalist but quickly became a favourite of the director of the Orchestra, the grandfather of all arrangers; Nerses Nalbandian. He spent most of the 60’s and 70’s in various bands as a singer, but was also a writer too! Not only vocally talented, he was a wonderful lyricist and as well as writing for himself, he wrote for other artists too.

Tezeta was released as a single in 1971 on Ethiopian label, Amha Records and backed main track,
Belew Bedubaye (which is also a rather stonking number – one I may revisit at a later date..I’ll come back and put a  link in if I do!!!!). It’s just what I needed today….It’s a little beauty! Listen above.

1 Response to SONG OF THE DAY Menelik Wossenachew – Tezeta