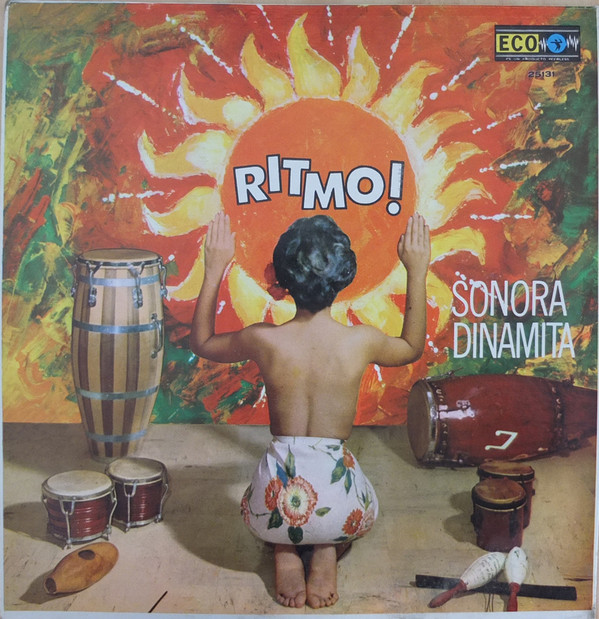 Ahhhh…..this is so good!! Recently, I’ve been trying to get a copy of the LP  that today’s song comes from, but its not looking too easy and there are definitely no copies in the UK! I will find one though!! In the meantime, I am so happy to be sharing Eco en Stereo, a track that was issued on the band’s second LP, Ritmo, which was released in 1960!

Sonora Dinamita are a Columbian Cumbia group that first came together in 1960! Over fifty years later, with a shed load of records under their belts and plenty of line-up changes, the band are still going and (I think) released their most recent record in 2015?

My focus today, however, is on their very early/first recordings from the late 1950’s-early 1960’s. At this time Sonora Dinamita were one of the first Cumbia bands to reach international success which, in turn, helped to popularise the genre through Latin America and the world.  The original band stayed together for three years, creating three albums in that time, before disbanding in 1963. Sonora Dinamita then reformed in 1977! Their first three years were golden times!

Eco en Stereo is a song the band issued in 1960 and is an utter beauty with its hypnotic rhythms and entrancing vocal incantations. The horns, rapturous in their escape, really get going once the pace picks up, unleashing their spellbinding powers with such passion…this song has me completely at its mercy!

Listen above and if you fancy grabbing a copy of this track, you can find it on a very cool Analog Africa compilation entitled, Diablos Del Ritmo: The Colombian Melting Pot 1960​-​1985.  This is really worth a listen!!