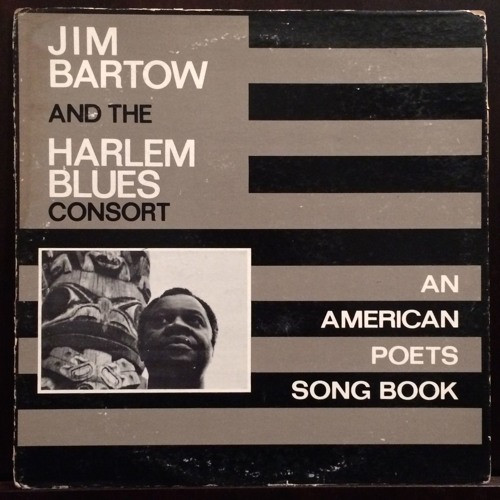 I have another rather obscure offering here for you today and as of yet have found very little about the artist/band behind this song. What I can tell you is that Jim Bartow and the Harlem Blues Consort released just one album together in 1975 – but Jim Bartow did release other albums on his own (with the earliest release dating back to 1965 I believe?).

An American Poets Song Book was issued on a label called Blues Blood who, aside from this record, only put out a couple of other Jim Bartow albums in the mid-to-late 1970’s. As you may have guessed from the title, An American Poets Song Book contains 12 songs, all of which were arranged by Bartow and all of which were inspired/derived from poems by various authors, such as today’s offering by Robert Frost.

I’d like to hear the other tracks on this record, but I don’t think many (if any others) are that available! I may just have to buy the record to hear more! I like the concept though and I like what Jim Bartow has done with this poetry, bringing it to life though song!! Accompanying musicians involved in the creation of this record are included below, as well as the original poem! Enjoy!

Away!
by Robert Frost

Now I out walking
The world desert,
And my shoe and my stocking
Do me no hurt.

I leave behind
Good friends in town.
Let them get well-wined
And go lie down.

Don’t think I leave
For the outer dark
Like Adam and Eve
Put out of the Park.

Forget the myth.
There is no one I
Am put out with
Or put out by.

Unless I’m wrong
I but obey
The urge of a song:
I’m—bound—away!

And I may return
If dissatisfied
With what I learn
From having died.