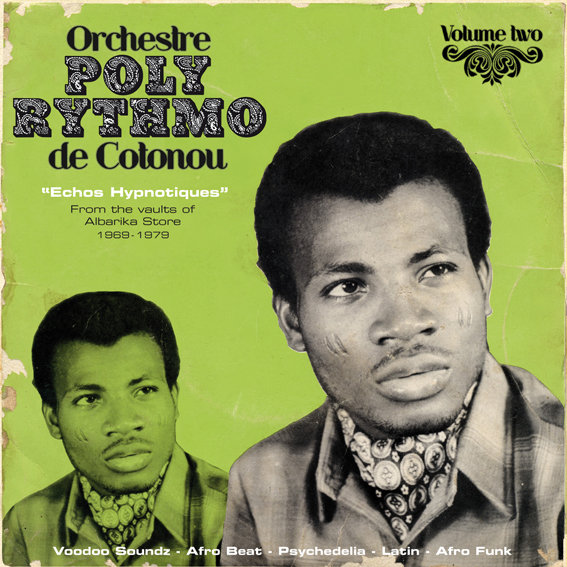 There’s been a discernible shortage of warmth in my days as of late, so when this little ray of sunshine cast itself upon me today, it felt so damn good!!

Today’s delicious feast of sound comes to you courtesy of The T.P. Orchestre Poly-Rythmo de Cotonou, a West African band hailing from Benin.  The “T.P.” stands for the French “Tout Puissant” and translates as “All Mighty”…which they most certainly are!!  Coming together in 1966 the band still records to this day, albeit with a slightly different line up and the longevity of their career has led to a monster number of releases over the years, with LP releases numbering over 50 and 45’s exceeding 100!!!!

As their name suggests, their music relies on a blend of rhythmic percussive elements, drawing from the French heritage of Benin along with the influence of their anglophone neighbours like Nigeria and Ghana.  Some of the planet’s most exciting rhythms are related to the complex Vodoun religion born in Benin and were supported by chants and dances which have been transmitted from generation to generation and are still being performed to this date, a few hundred years after they were created.

These influences and rhythmic elements form the backdrop for the varied styles they play and their music infuses a multitude of sounds including, afrobeat, highlife, jazz, soul, rhumba and latin music.  Tracks are sung in either French or their native Fon tongue and, as founder/bandleader Melome Clement explains in the records sleeve notes how, “Drums, bells and horns are the fundamental instruments used during our traditional Vodoun rituals. We added guitars and organs – we modernised those ancients rhythms and combined them with Western genres that were in vogue at that time”

Noude Ma Gnin Tche De Me is a high powered fusion of hypnotic melodies and spellbinding rhythms, capturing elevated spirits along the way (including mine) as it transcends high into worlds of sunshine and exuberance! It’s just what I needed today!

Check it out above and listen/purchase more from the Orchestre Poly Rythmo de Cotonou here.